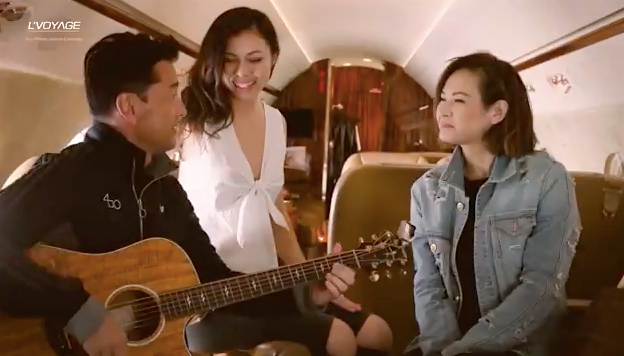 HONG KONG, February 8 2017 – L’VOYAGE, a Hong Kong-based private jet chartering company, has teamed up with actor and heart throb, Michael Wong (王敏德Wong Man-tak), to showcase how the well-heeled kick off their shoes and relax on a personal jet. Together with his wife, Hong Kong supermodel Janet Ma, and daughter, fashion icon Kayla Wong, Michael Wong and his beautiful family are filmed inside a luxurious Gulfstream G450 enjoying a private celebration, relaxing, smoking a cigar and practising golf.

Filmed in December 2016, the entire video shoot was directed and produced by Wong. The L’VOYAGE video gave Wong the opportunity to combine two of his passions outside of work in one short film; his family and flying. Michael Wong is an avid aviation enthusiast who first earned his wings to fly in Canada. Today, he is qualified to fly the Bell 206, Bell 429 and MD 500 rotorcraft. Wong also helped kick-start the first regular flying programme with the Hong Kong Air Cadet Corps for young aviation enthusiasts in 2000. As of 2016, Wong has appeared in about 60 films, the more noteworthy ones being Transformers: Age of Extinction (2014), Beast Cops (1998) and Final Option (1994).

L’VOYAGE, which arranges ultra-luxurious journeys for ultra-high net worth clients in greater China on a regular basis, says that there is an upward trend in the super rich taking overseas private jet trips as a family unit. “When our clients fly overseas for family holidays, they usually combine it with property and college tours. In addition to preferring the convenience of making multiple stops of their choice, they often have requests that commercial airlines cannot accommodate, such as special medical assistance, dietary restrictions and security arrangements. Sometimes, they even request to take their pets along with them, which we are more than happy to accommodate, whenever possible,” said L’VOYAGE founder and chairman, Diana Chou.

The video is available in both English and Chinese and may be viewed before December 31, 2017 on:

L’VOYAGE is a bespoke private jet chartering company based in Hong Kong with a long heritage in serving discerning corporate travelers and jet-setters. Part of a specialist business aviation group that began in 1999, L’VOYAGE offers unrivalled access to aircraft options and landing destinations, coupled with highly personalised hospitality. L’VOYAGE is also the first Wyvern approved broker in Asia, making its safety intelligence of the highest accredited standards within the region.